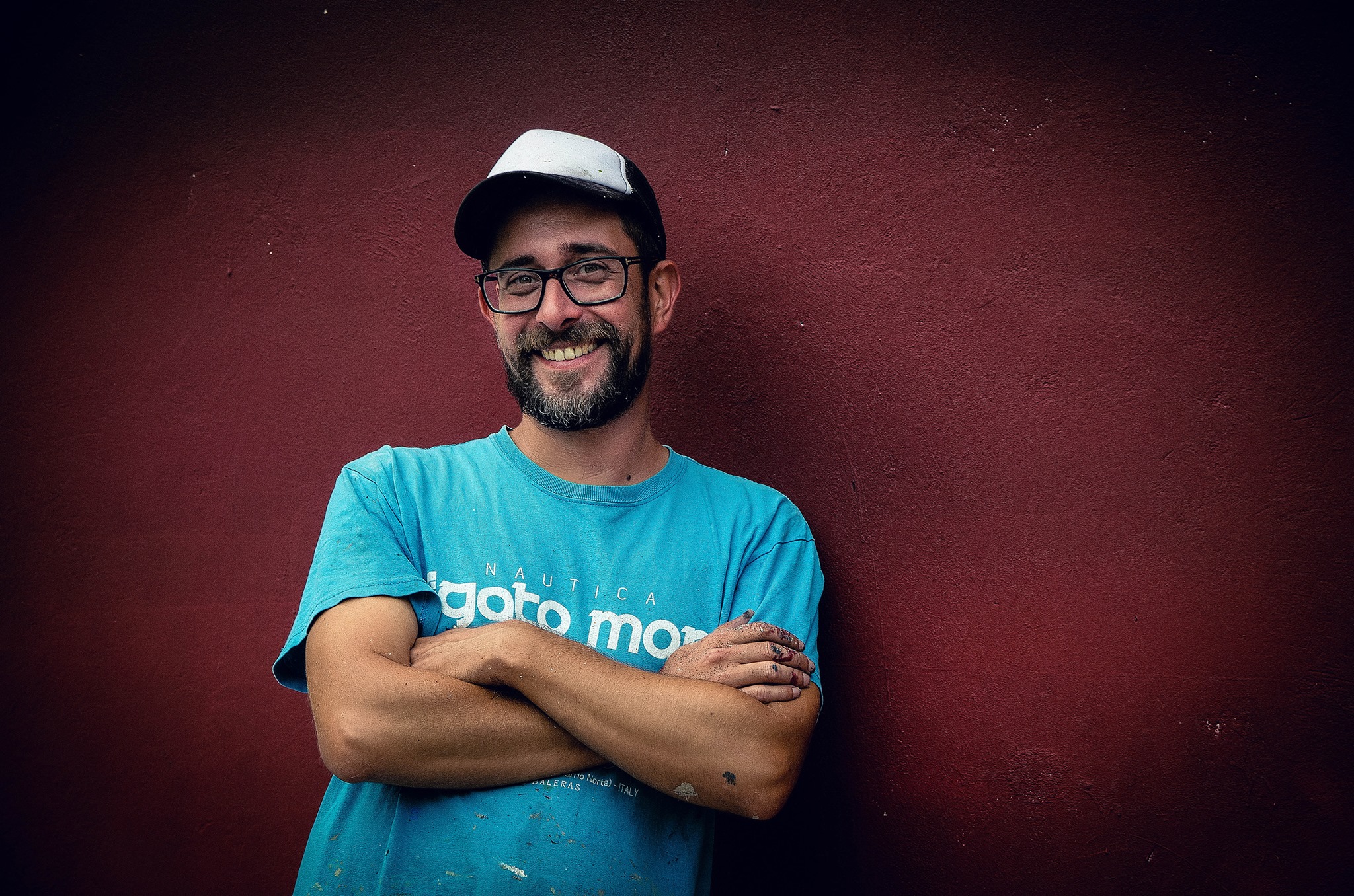 Peeta, also known as Manuel Di Rita, is a graffiti artist since 1993 currently living in Venice. He is a member of the EAD crew (Padova, Italy), FX and RWK crews (New York City) and has participated, over the years, in jams, festivals and art shows all over the world. His work explores the potential of sculptural lettering and anamorphism, both in painting and in sculpture.

In my pictorial, sculptural and mural compositions, my geometrical shapes act as they interact with the surrounding environment. In particular, when painting on walls, my aim is always  to create a dialogue with the structural and cultural parameters of the surrounding context, either architectural or not.
Initially, my works only realized the sculptural quality of individual letters, namely the ones that spelled out my own moniker, Peeta. Progressively, the fusion between traditional lettering and three dimensional style has given life to a unique kind of visual rhythm. Today, through my anamorphic works I redesign the volumes of any kind of surface involved, thus causing with my paintings a “temporary interruption of normality” by altering the perception of familiar contexts and so raising a different understanding of spaces and, consequently, of reality on a whole.
Metaphorically, I want to neutralize preconceptions and urge the emergence of new perspectives. Anamorphism totally embodies the intent, always pivotal in my production, to reveal the deceptiveness of human perception, the fallacy of narrow and fixed points of view through visual tricks which, proceeding from the attempt to confer a three-dimensional semblance on a pictorial representation, ultimately reveal their will to deceive.
Due to my turn towards anamorphic painting, I choose to transform also my traditional shapes in order to let them interplay with standard modules of architectonic structures, often changing them from irregular and smooth to geometrical solids.
Constantly running in parallel with my mural and painting activity, the role of sculpture comes to be essential for my overall production as it represents for me a direct contact with three-dimensionality in order to understand the rules of light and shadows and to reproduce them.

How are you doing now?
I am actually good! Despite the uncertainty and the exceptionality of the phase the whole world is experiencing, I have found lots of reasons to appreciate the tranquillity of a slower pace of life. Also, it has been a joyful moment for my family as my daughter was born during this period, filling it with new positive energies.

What’s lockdown like for you?
It has been a moment of reflection and revaluation. I’ve rediscovered a part of myself that could rarely stand out during my ordinary life made of tight work-schedules and travels. I enjoyed silence, and calmness and found a lot of comfort in that.

Are you able to work/ where is your studio normally? What's your current set up.
Yes, I could work at my studio - which is not far from where I live, in any way - but I decided to move my studio home for the period. Initially, I dedicated une room inside the house to studio work but as soon as spring exploded, I started working outdoors, mostly in my big terrace among plants. Also the sculpture I am exhibiting at Vitamin Sea show was created there.

What projects are you working on now?
I am designing and creating sculptures and painting on canvas. It has been hard at the beginning to realize that I couldn’t paint walls, as planned, for a long and unpredictable time but I just needed to take some time and think about new strategies and I did it.

Is lock down / coronavirus having an influence on your work?
Somehow it is. Having more time to focus on studio work, I have sketched and studied a lot and I often didn’t have so much time to take care of these aspects before.

Which artists/ instagram accounts are you most addicted to now?
I am not really using social networks in this period. Somehow, I extended the concept of social distancing to social media distancing, we could say. But it is not about the fact that I am not comfortable with them, I have just been so focused on very practical and domestic activities that I got really distracted from the internet.

What are you listening to/ reading/ watching when you can?
I was used to listening to music at the studio or while traveling but staying home makes me appreciate silence more than everything, and conversation too of course. I am not reading books but I have read lots of news recently and technical manuals.
View available work by PeetaView All Artists